Never look a gift horse in the mouth, I’ve always heard, but sometimes, doing just that is a must.

The combination means a horse’s teeth can get jagged and can cause ulcers inside the mouth. Ever accidentally bite the inside of your mouth?

Zuhiiiiiiiiiiiiii. (Listen to how it sounds in this video: http://wp.me/p1QAlM-6z)

I’ve never liked the sound of a dentist’s office, particularly the drills. That’s my version of how that sound would be spelled.

Imagine, then, what the sound would look like if it were from a drill for a horse’s mouth.

Who even knew drills existed to file a horse’s teeth?

The last time my horses had their teeth floated, which is what the filing is called, the vet (not an equine dentist) used a rasp of sorts. The vet also used what’s called a twitch, which twisted and pinched the top lip. 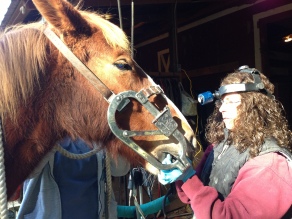 Dr. Diane Febles examines Pumpkin’s mouth before deciding what instrument to use.

I’m not sure if the goal was to numb or distract the horse, but I didn’t like it, particularly when I had to hold the twitch.

The problem is that inflicting pain on a horse, in this case the dentistry, is unsafe, as they’re fight or flight animals. Vets, understandably, don’t want to see which one will happen.

Before doing any work on the horse, the doc checked their teeth. Yep, they both needed some dental work. I also asked her to check Pumpkin’s mouth for wolf teeth, to see if they would be a problem. Since I don’t use a bit in Pumpkin’s mouth, the wolf teeth would pose no problem, the doc said.

Pumpkin and my other horse, Steel are pretty tall, but a shot of the loopy drug meant their heads drooped low enough so the doc, wearing headgear with a light, could look into their mouths, so low their heads were put in harnesses to steady them for the procedure and keep their mouths open.

And then, the noises. Ay yay yay.

Same noises as at the human dentist’s office, but louder.

The horses were not in any pain, though.

Pumpkin had smoke coming from her nostrils, actually not smoke, but ground tooth dust.

It all was a new experience for me, but the doc did a great job, as both horses had soars in their mouths from jagged teeth.

One other similarity between horse and human dentistry – the cost. Neither is cheap.